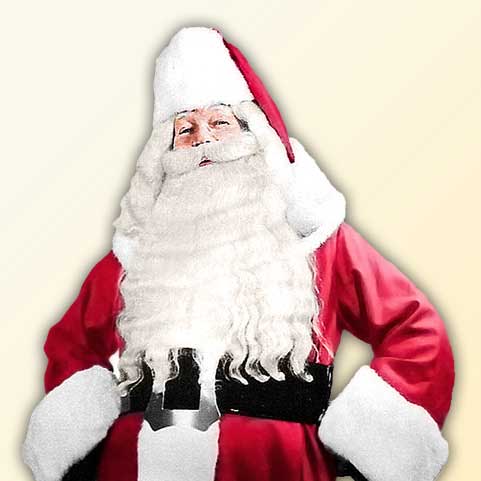 Competitors have copied, but none to this day give you the consistency in color and the quality in materials used to achieve the realism this style of Santa Claus suit has to offer.

Our quality Santa Claus Suits are not costumes, but finely tailored, hand sewn clothing made of the finest blended wool material, with full satin lining, and trimmed in realistic imitation fur or, for special order, our genuine Icelandic Sheep, Rabbit, or Arctic Fox fur.

Our wool is a rich crimson red, extra long wearing, and with its natural qualities, is highly practical and extremely comfortable in all working conditions, as compared to Santa Claus suits made with velvet/velveteen or other synthetics, like plush-pile and corduroy.

Our remaining Santa Claus and Mrs. Claus apparel is made with the same skill and quality materials as our Santa Claus Suits. Our Mrs. Claus Dresses are created to match Santa Claus perfectly, and will be made to your particular size, or styled to your personal taste.

Our apparel has been worn by many and looks great on all. It has been crowd tested and is convincingly real under all holiday entertainment conditions. So whether you’re just starting out, or are a veteran of our beloved characters, let us place you into a professional, long-lasting Santa Claus suit, Mrs. Claus Dress or other select holiday apparel at a price you can afford. Start browsing our Catalog.